How to use a Bong / Water Pipe 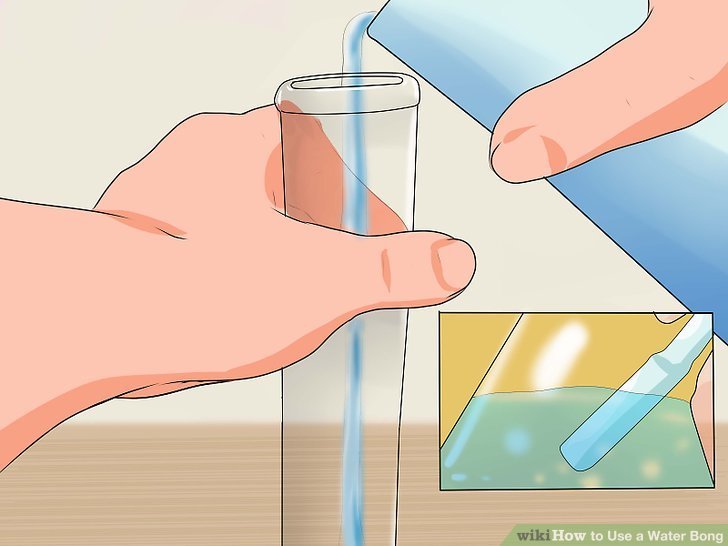 This article will be split in three parts, Preparing your Bong/WaterPipe; Packing the Bowl and Taking a Hit.

It will be assumed that you know your Bong / Water Pipe device, if not, take a quick look at the Basic Bong Anatomy here.

Fill the bong with water until it just covers the downstem.

Remove the downstem and fill the chamber with water so that all the holes in the downstem are covered. It should be low enough so that it doesn't spill out of the carb, if you have one. Try to get the water between 1" and 1/2" above the end of the downstem. The temperature is a matter of preference-- some people love cold, some warm, and many are fine with room temperature.

Add ice to your bong (optional)

Ice will cool down the smoke, which some people believe makes it easier to inhale. Carefully put some in the water to cool it down, removing the downstem first so that the ice doesn't break it on the way down.

Breath as if you were smoking the bowl normally, once with the bowl in and once with it removed. Does any water hit your lips? If so, you should pour some out. Are all the percs bubbling when you inhale? If they are not, add a bit more water so that you see big, honeycombing bubbles up the sides of the glass as you inhale.

Remove the bowl from the bong to fill it up

This is so that you don't accidentally knock the entire thing over while packing.

Loosely pack the bowl with your smoking material

Do not pack it over the top edge, as the smoke will drift away instead of into the bowl. If you have a large hole the bottom of your bowl, break off a bigger piece of smoking material (such as a 4-5mm "nugget") and use it to lightly block off the hole. This prevents the herb from sucking into the downstem.

If you do choose to use a grinder you should give it a quick, coarse grind. Finely ground smoking material can get sucked into the chamber and become extinguished before it has time to release its seductive smoke. This is sometimes referred to as "snapping the bowl."

Make sure the bowl is not so full that your smoking material falls out, or so tightly-packed that no air can pass through. You should pack your material to a medium-light consistency. You want to get as much material in your bowl as possible while still being able to pull air through it with each inhale.

Place the bowl into the downstem of the bong

Fit it in snugly, but don't feel like you need to cram it in. Unless you have a carb, you'll need to remove the bowl to smoke from a water bong.

Hold the bong securely in your non-dominant hand

Most people grasp the bong firmly around the neck, which is made to fit in your hands. The bottom often rests in your lap or on a flat surface. Novice bong users should always follow this rule: Keep the bong on a flat surface (like a tabletop) to minimize the chance of it falling and breaking.

Place your lips inside the opening, forming a seal.

It is bad etiquette to wrap your lips around the outside of the mouthpiece. Instead, purse your lips and push them lightly in the inside of the tube. Make sure that the entire opening is sealed, otherwise you won't be able to draw any smoke out.
Practice good bong etiquette by wiping your mouth, drying your lips, and placing your lips inside the inhale hole instead or entirely around it. You'll create a better vacuum and you won't slobber all over the top of the bong, making the next hit unpleasant.

trike your lighter with your free hand and slowly tilt it down over the bowl. As you do, begin inhaling so that you "pull" the flame into the bowl, igniting your smoking material.

If you don't want to inhale the fumes of a lighter, or simply don't want to deal with the hassle of many moving parts, try lighting hemp wick instead. Hemp wick is an organic lighting string that burn slowly and stay lit. You light the end, like a candle, and use this to light the bowl.

Remove the flame once the bowl has caught, but keep inhaling

Once the herb is lit, it will start glowing and the bowl will fill with smoke. The key here is to inhale slowly. You don't want to be inhaling your smoking product so much as gathering smoke inside the bong's chamber.

Once the smoking material is lit, it will stay lit as you pull air through it, helping the rest of the bowl catch as well. It should only take 1-2 seconds of direct flame.

Move on when you start running out of breath. You don't want to be completely winded before you inhale the smoke-- you should have one big, quick breath left in your lungs.

Inhale the smoke with a big, deep breath by removing the bowl or opening the carb.

To get the smoke into your lungs, you need to allow fresh air to flow through that pushes the smoke up and into your lungs. Use the hand that held the lighter to pull the bowl out, or remove your finger from the carb. As soon as you do, take a deep, rapid breath to inhale all the smoke in the bowl.

Many beginning smokers struggle to know how much air they have left for this final inhalation. If you are unsure, remove the bowl after the chamber has filled up with smoke, before the smoke gets into the neck.

There is no real benefit to keeping the smoke in your lungs, as most pleasurable compounds are absorbed instantly.
Place the bowl back into the downstem or clean it out if it is finished.

Credits for media and text to: https://www.wikihow.com/Use-a-Water-Bong